Thermal asymmetry in hamstrings: the relationship between sprinting and thermography in elite football players.

In a recent publication, the group of Jose Luis Felipe wanted to evaluate how the thermal asymmetry analysed with ThermoHuman software affects performance in a repeated sprint test (RSA).

The scientific paper of Majano C. et al. (2023) with a cross-sectional study model has wanted to analyse how previous asymmetries in the main muscle groups could affect the performance of football players in one of the most determining skills, the ability to repeat sprints (considered as the most important high-intensity actions in the physical aspect Faude O. et al (2012)).

To do this, they carried out a thermographic study with a FLIR T420 camera (resolution of 240 x 320 pixels) to 20 professional football players of the Spanish second division (28.9 ± 3.9 years old; 178.7 ± 9 cm height and 74.8 ± 6.4 kg weight) before performing the field tests, complying with the standards of the TISEM protocol (Moreira et al. 2019). The images were analysed with the ThermoHuman software, which automatically segments the regions of interest, in this case the lower limbs, and which has been scientifically validated for that purpose (Requena-Bueno et al. 2020).

The tests they performed after the evaluation with thermography and warm-up were: three jumps with countermovement (CMJ), a repeated sprint test (RSA), consisting of 6 series of 30 meters of sprints with 20 seconds of recovery between series (6 x 30m / 20″) and finally three CMJ jumps again (Figure 1).

Results in the relationship of thermal asymmetry with performance.

Thermal asymmetries are one of the main metrics provided by ThermoHuman software. They base their calculation on the average temperature difference of the right region with respect to the left region or vice versa, to show which region has a hyperthermic difference. This metric participates in the calculation of the thermal risk index (TRI) that informs us in a simple way in the software of those players who have more imbalances (Figure 2).

Figure 2. Asymmetries module ordered by TRI, the number and colour above the image, indicates the percentage of asymmetries and their severity.

The players were divided into two groups: the group with low thermal asymmetry (when the region had less than 0.2ºC) and the group with high thermal asymmetry (when the region had more than 0.2ºC). The authors selected this breakpoint because of the high supervision of the players (In addition, in other studies evaluating professional football players, the normal profile of their regions doesn´t exceed that threshold so selection may be highly warranted. (Maior, A. S. et al 2017).

In the statistical analysis, significant differences were found in the best times to complete the RSA test. Players with fewer hamstring asymmetries completed the first four sprints in less time than players with more asymmetries (Figure 3). 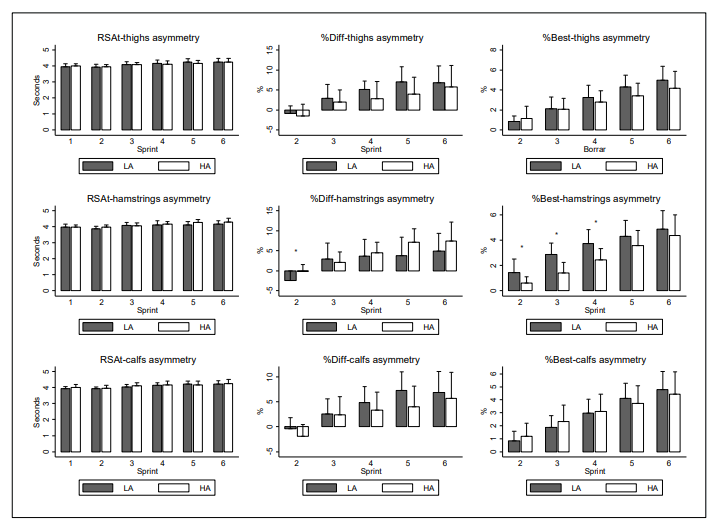 The relationship between previous thermal asymmetry with fatigue in the region to be trained.

The fact that the group with low hamstring asymmetries had the best sprint and a smaller difference in the second sprint represents an improvement in performance compared to the group with high asymmetries. This may be due to the high demand for this muscle group in sprint actions (Howard, R. M. et al 2018). Sprinting above most hamstring strengthening exercises is the activity that most requests this muscle group, being also one of the actions of the injury mechanism of this musculature (Prince C. et al 2021). So, this type of stimulus supposes both “poison” and “vaccine” for the hamstrings and must be programmed when the athlete is in the best conditions of adaptation.

For this, it could be interesting to evaluate with thermography due to the relationship of thermal asymmetries in that region with the ability to perform and tolerate fatigue (due to the significant decrease in jump height for the group of high asymmetries after RSA that is associated with a greater neuromuscular fatigue (Claudino, J.G. et al 2017)).

The authors point out limitations in the study as it is a cross-sectional model of a single shot, the breakpoint in another measure could promote stronger relationships or the small sample size.

Conclusions of ThermoHuman on the use of thermal asymmetries for fatigue control.

A thermal imbalance seems to be related to a worse predisposition to generate high-intensity efforts, and an early emergence of fatigue in the exercised muscles, although these conclusions must be taken with caution.

The hamstrings are the focus of the scientific community due to your high incidence of injury. This incidence has been increasing by 24% per year according to the latest research, despite efforts in its prevention (Ekstrand et al. 2022), being a lesion with medium severity and almost the injury with the highest incidence (Bahr R. et al. 2018). This undoubtedly places this muscle group as the most strategic when evaluating (Figure 4). 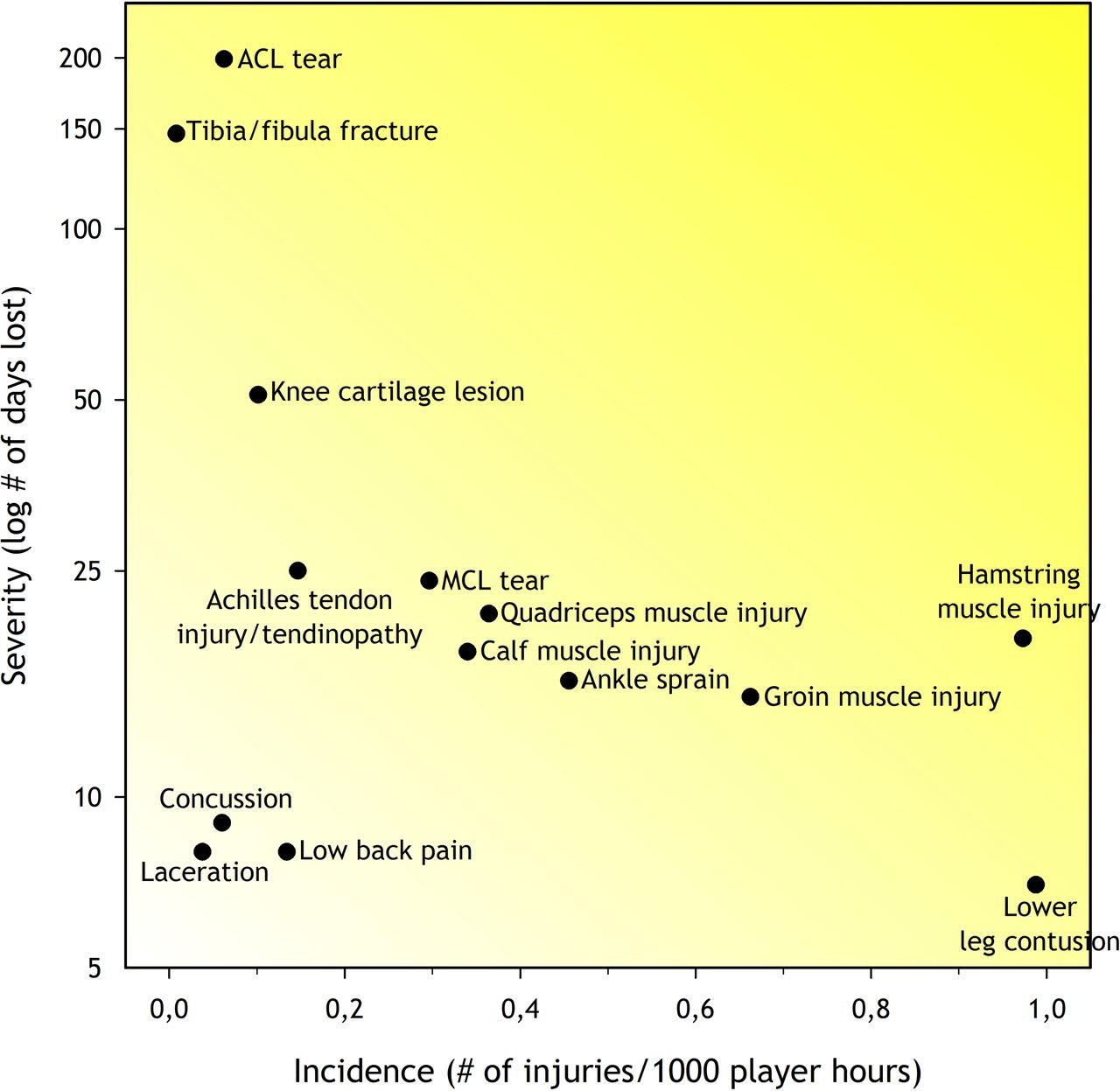 Figure 4. Matrix of injuries according to their incidence (injuries/1000 hours of exposure) and their severity (days of absence due to injury). Excerpted from Bahr R. et al. 2018.

Therefore, the research of Majano et al. (2023) is a key piece to apply thermography in the control of internal training load and injury prevention, with the aim of optimizing the selection of training tasks to condition the is hamstring muscles at the most appropriate time.

Thermohuman has received funding from the Centre for the Development of Industrial Technology (CDTI), in participation with the European Regional Development Fund (ERDF), for the R+D activities involved in creating a new tool, based on thermography, for the prediction and prevention of rheumatoid arthritis. See project detail.

This website uses cookies to improve your experience while you navigate through the website. Out of these cookies, the cookies that are categorized as necessary are stored on your browser as they are essential for the working of basic functionalities of the website. We also use third-party cookies that help us analyze and understand how you use this website. These cookies will be stored in your browser only with your consent. You also have the option to opt-out of these cookies. But opting out of some of these cookies may have an effect on your browsing experience.
Necessary Always Enabled
Necessary cookies are absolutely essential for the website to function properly. This category only includes cookies that ensures basic functionalities and security features of the website. These cookies do not store any personal information.
Non-necessary
Any cookies that may not be particularly necessary for the website to function and is used specifically to collect user personal data via analytics, ads, other embedded contents are termed as non-necessary cookies. It is mandatory to procure user consent prior to running these cookies on your website.
SAVE & ACCEPT